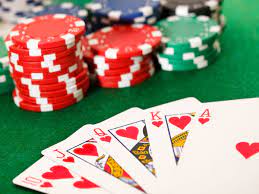 Poker is an incredibly exciting game, both to play and to watch. While there are plenty of periods of inaction, there is always a lot of tension, and blockbuster moments can develop from seemingly nothing. Players often have a good idea of their opponent’s hands, but there’s no way to know for sure, which makes it so unpredictable and exciting to play and watch. Big bluffs can change the game, as can the community cards being revealed on the flop, turn, and river.

Poker games are often played for high stakes, and things can get controversial when there’s a lot on the line. In the heat of the moment and with so much to lose and everything to gain, tempers can often flare, and players can lose their cool as well as their money. Here are some of the most controversial hands in the history of poker.

Tony G and Phil Hellmuth are two of the most well-known figures in poker, partly due to their skills but also their personalities. Other players are often wary of crossing either man, and on this occasion, they came up against one another to produce a classic moment. Tony finds it annoying that Hellmuth is playing in a cash game with a short stack. In an effort to get Phil to rebuy or quit the game, he aims to get Phil’s chips.

The chance appears as he glances down at AK in the double straddle facing an open from Phil. Tony moves all in, and Hellmuth, who is seated next to AJ, is faced with a choice. He is aware that he’s facing a dangerous opponent who also dislikes him. But to complicate things, Tony G claims he didn’t check his hand before going all in. After giving it some thinking, Phil chooses to believe Tony and place the call because his AJ is significantly better than the two unrelated cards Tony claimed to have. But Tony then reveals his cards, beating him and causing him to tilt.

One of the most important rules of live poker is to protect your cards at all times. At the 2009 World Series of Poker event, Denis failed to do so, losing track of her pocket aces and losing out on what could have been a big win. Estelle must have been overjoyed to see her pocket aces after JC Tran raised the bet to 32,000 while she was on a short stack. She quickly made an all-in play and pushed her chips to the middle of the table while briefly forgetting to protect her cards.

The dealer only needed that brief window of time to sweep her cards and put them into the pile. Denis realized what had happened in a matter of seconds, but it was already too late. Her cards had already been mixed with the remainder of the discards and were gone. The hand was declared dead, and her chips were lost.

Ivan Freitez Tries to be Sneaky

When you make an action in poker, you have to stick to it, and you can’t change your mind once it’s done. Freitez tried to do exactly that at the 2011 European Poker Tournament Grand Final in Madrid. Freitez had a full house that had filled up on the river and wanted to sneakily get some extra value out of his hand when he declared a raise before only putting in chips for a call.

This kind of move is against the rules in poker, and it was confirmed that Freitez had tried it before in the past with a strong hand. While Freitez was aware that he couldn’t back out of the decision and would have to make the raise, he was employing an angle shoot to fool his opponent into thinking he had a poor hand in order to get a little extra value on the river.

Which Poker Games Give You the Best Odds

5 Strategies To Play And Win At Three-Card Poker